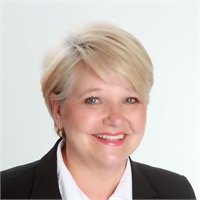 A native of Alva, Oklahoma, has lived in Ada since 1979. Leigh graduated with a Bachelor of Science degree in Biology Education from East Central University in 1980.

At the state level, Leigh serves as Commissioner on the board of the Oklahoma Department of Wildlife Conservation (ODWC), a position she was appointed to by Governor Mary Fallin in 2014.  Leigh is the first woman to serve on this board since the ODWC was established in 1909.  In this capacity, she represents ODWC District 4, which includes: Creek, Lincoln, Okfuskee, Seminole, Pottawatomie, Pontotoc, Hughes, Johnston, and Coal counties.  In 2016, Leigh was reappointed to the ODWC Commission for an eight-year term. In her capacity as an ODWC Commissioner, Leigh frequently presents programs to community groups on the work of the ODWC.

In 2016, Leigh and her husband, Roger Gaddis, were recognized as “honorees” at the Journal Record “Beacon Awards” for their community service contributions at the state and local level.

In April of 2018, Leigh graduated from Leadership Oklahoma (LOK), class 31, joining Roger, who is a member of LOK, class 25.

At the local level, Leigh is a graduate of Leadership Ada (Class of 2011) and she currently serves on the Leadership Ada Committee for the Ada Chamber of Commerce. Also, Leigh is a co-chair of Career Discovery, a highly regarded educational program that provides area students with hands-on experience in a broad array of career paths.

This program, founded by former State Senator Susan Paddack and the Ada Jobs Foundation, begins with students in the 8th grade and continues through their senior year in high school.  Leigh is also actively involved in the related Student Mentoring Program with its focus on area high school students.

She is a member of the ECU Foundation President’s Circle; and she serves as an elder at First Presbyterian Church.  Leigh is a member of the PEO Chapter HA, which is part of a national philanthropic educational program that promotes educational opportunities for women.  For many years she has organized an annual holiday food collection drive for the needy in Ada and surrounding communities.

In past years, Leigh served as a board member of the Boys & Girls Club of Ada and she was a volunteer with the American Cancer Society and The Salvation Army Auxiliary.

Leigh is a lifetime member of the National Rifle Association, a member of Safari Club International, and she has provided support for the Oklahoma City Gun Club- “Women on Target” program, and the National Wild Turkey Federation.

Wherever possible, Leigh utilizes her success in business to provide a value-added benefit to the community.

In one recent example, Leigh managed a corporate contribution effort on behalf of Gaddis & Gaddis that donated low power electric vehicles to both Mercy Hospital Ada and East Central University.